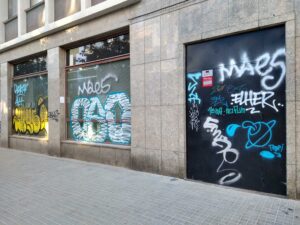 As I have been riding across Europe it seems that nearly every large town or city has been infected with a plague of graffiti. Maybe coming fresh from the Picasso Museum made me hyper-sensitive to bad art but I felt the need to write a few words on the subject. Cities in the USA and Canada have similar infections but it just seems to hit me harder to see buildings that are ancient by my standards defaced with some of the nastiest stuff to ever leave the nozzle of a spray can. I understand that some consider it an art form but given the quality of some of the work, it is clear that the artists need a hell of lot more practice before exposing their incompetence to the public. Even impromptu art that has a degree of artistic merit gets covered in crude tags that destroy whatever the original artist intended. At times I would like to see the vandal skinned with a dull potato peeler. 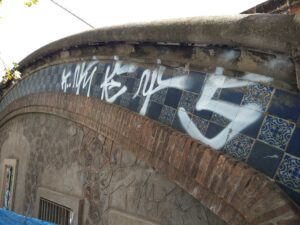 Some cities are worse that others but every city, even Venice has some. Barcelona seems especially bad with spray bombers willing to paint nearly anything that stands still for long enough, even the trains. 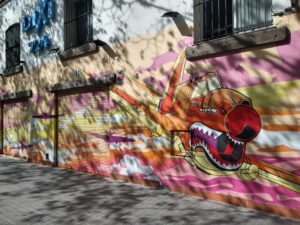 This is not to say that every form of graffiti is bad. Temporary construction barriers and boarded up windows are fair game but maybe the street artists could get together and jury the installations. You could start by just painting your bedroom wall until judged good enough to try the front door of where you live. From there you may be allowed to progress to boarded up windows and finally to construction barriers. Your crowning glory could be to be given a commission to do an actual wall mural.

Until such a graffiti bureaucracy is established, maybe cities the world over should invest in some power washers and blast the stuff off as soon as it is painted. There is no glory in graffiti that is unseen and the real city that lies underneath can be both ancient and beautiful without additional decoration.