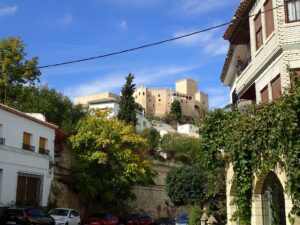 First, my title is not a typo or an example of my poor spelling habits. We are now riding through that portion of Spain that was invaded and occupied around 700 AD by the Moors. The invasion took less than ten years to complete and the occupation was not ended until 1492. Many of the castles that we have seen were either built upon old Moorish forts or after the reclamation as a defense against another invasion. Many were built by wealthy Spaniards newly rich from the easy gold harvested from the Americas by the Conquistadors.

Today these castles are sometimes maintained as a local tourist attraction or allowed to fall into ruin if located too far from a town or sizable village. Some are hard to spot if you are not looking carefully.

Our ride was a fairly short one but with two big climbs separated by a wide valley and a route that offered a long downhill glide for around ten kilometers. This glide passed through some industrial agricultural lands with large operations raising chickens and hogs and apparently doing so with little human labor.

The toughest part of the day came at the end when the temperature was the highest and we faced a seven and a half kilometer climb of around 700 meters (2,300 feet). Our destination was a stylish, boutique hotel just below the castle in the photo. The entire place had a charm that reflected the style of an old hacienda but with modern conveniences. Our dinner was a lavish nine course marathon of cuisine that seemed to never end. It is good that we burn so many calories with our rides as we appear to be eating our way through Spain. 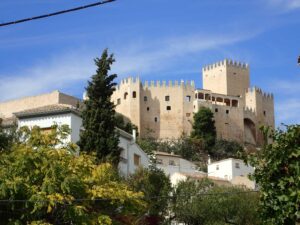