We spent this day is mostly rural surroundings leaving behind us the orange and mango groves for some marginal olive orchards and some rugged hill country. There were a lot of climbs, some of them steep as we wheeled our 95 kilometers through over 1100 meters (nearly 4000 feet) of uphill to our destination in the town of Caravaca De La Crux where it is said a relic from the original cross is enshrined. 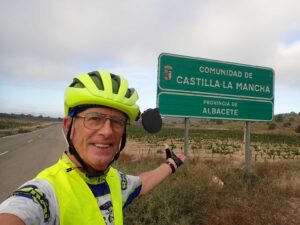 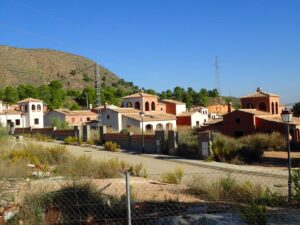 Along the way we passed another relic, this one of the financial collapse in 2008. In that year Spain’s hot housing market collapsed as did many other around the world. Near the region of La Mancha (as in Don Quixote) is a failed development of epic proportion. The story we were told was that there was a rich mining development that was to become the center of an entire region bringing in thousands of workers and high paying jobs. An ambitious city was developed with many homes and buildings fully completed and many more in various stages of construction just when the boom went bust. What remains is a ghost city of epic size that could be yours for the right price. I have posted a photo of the contact information if you are interested. 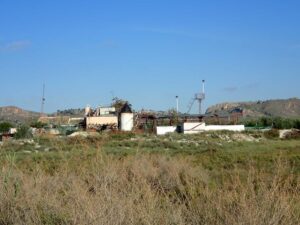 There are also plenty of other abandoned opportunities nearby such as this attractive, handy man’s special amusement park. With either of the above you too can be a modern Don Quixote and tilt at some seriously big economic windmills. Finding your own Dulcinea may be an additional adventure.

The town of Caravaca de la Cruz is another ancient Spanish town with narrow streets, a huge cathedral and of course a Holy Relic. It is the fifth Holy City of the Catholic faith and is the sanctuary for a miraculous cross. This cross was brought by two angles who flew in through a window delivering the cross to allow a captured missionary priest to celebrate a mass before the Muslim king who ruled the area. During the mass the wine and bread are transformed into the body and blood of Christ but their appearance stays the same. However, this time the king saw the baby Jesus instead of the host. The king was overwhelmed by these miracles and immediately asked to be baptized into the Christian faith. The cross is also believed to contain a relic of the original cross of Christ’s crucifixion. The town has welcomed pilgrims and tourists of all faiths ever since. 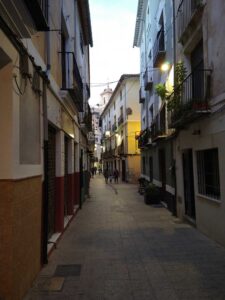