Granada is a busy place. We arrived on a Saturday afternoon to find the center of the town crowded with people eating, drinking and some even protesting something or another. Is it always this busy, we asked at the third sold out restaurant of the evening? Yes, we were told, all the time, every season and every day. I’ll take them at their word even though I suspect there has to be some day or season when things let up a little bit. Despite the crowds, we were able to find a good meal at a reasonable price with our fourth try.

Granada’s big attraction is Alhumbra. This is a magnificent fortress topping a high hill above the city that has been lovingly restored after a long and violent past. It was built over the remains of an old Roman fortress that was abandoned and allowed to fall into ruins, a fate that has happened to this location more than once over the centuries.

The location was claimed by the Berber king Badis ibn Habus in the 11th century. He rebuild much of the Roman ruins into a stronghold that was added to and improved by Arab rulers over the next few centuries. In 1333, Yusuf I, Sultan of Granada made further renovations and additions as he converted it into his royal palace. During this period Granada was home to Muslims, Christians and Jews who all were reported to have the freedom to follow their faith without interference. One wonders what happened to that concept. 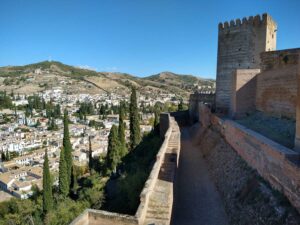 With the completion of the Christian Reconquista in 1492 the Sultan was tossed out and the palace became the royal court of Ferdinand and Isabella where Columbus received his royal endorsement for his chance encounter with America. Fred and Issy were buried there for awhile until the rent increases made relocation to a state sponsored location more affordable.

Afterwards, various Muslim emirs made the place their home with the usual murders and assassinations that seem to go along with that style of governance. Charles the Fifth took a brief interest in the location and started to build a lavish palace until a lack of interest or funds forced him to stop, leaving that last edifice an unfinished vanity home. After that things went downhill with squatters and gypsies making a home in the once grand and glorious rooms until the French came along during the Napoleonic Wars and blew up a good bit of the place. Then things took an odd turn for the better.

American author and diplomat, Washington Irving (of The Legend of Sleepy Hollow, Rip van Winkle and other well known works) came to stay for awhile in one of less ruined portions of the Alhambra. Here, among the graffiti covered walls and ruined grandeur, he talked with the gypsies, squatters and other residents of Granada to build a collection of tales that were published as. Tales of the Alhambra. The book was wildly successful and sparked a renewed interest in the site that eventually led to the city of Granada and the nation of Spain taking a greater interest in restoring the site. This is an oversimplification and likely an overstatement of Irving’s importance but like his writing, it is a good tale. There is a monument to him on the grounds and at least one hotel named for him and maybe a few restaurants and souvenir stands as well. 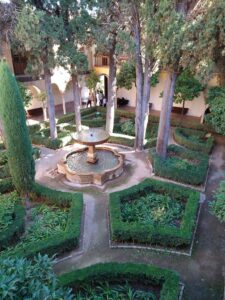 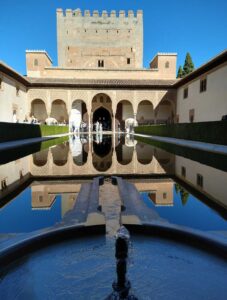 Regardless of what prompted the restoration, Alhambra today is magnificant. The gardens, fountains and restored palaces are well worth the time spent to see how this World Heritage Site must have looked in its glorious past. If you come, don’t just walk around, take a guided tour. The information they provide is well worth the additional cost. Be sure to bring your passport as identification is checked many times throughout a visit due to the large business in counterfeit admission tickets. As for anything else I have to say, I’ll let some pictures speak a thousand words. 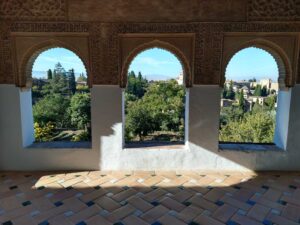 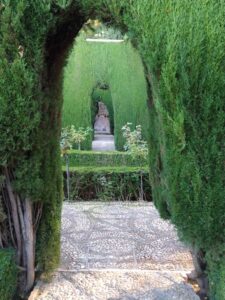 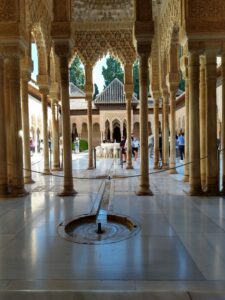 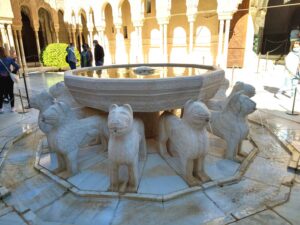 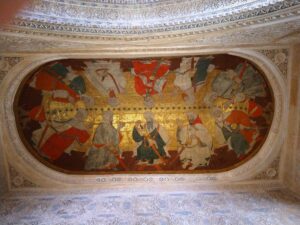